How Footcenter gained 23% of additional turnover thanks to webperf!

Everyone knows of the correlation between the optimization of an e-commerce website, and its conversion rate. So, instead of doing another blog post on the subject, we decided to do a little case study of our own, to convince the last sceptics of the beauty of a performant e-commerce website. And when we say beauty, of course, we’re talking about the beauty of intelligent money-making. 😉

We’ve been working with Footcenter (a Panini company) for some time now, and they’ve been nice enough to let us share their data, and good results, with you, to testify of the importance of web performance for e-commerce websites.

Let’s start this case study by just having a quick look at the timings of Footcenter store at the beginning of the mission.

That is how we found out that the loading times for each step of the classic sale funnel were far above what we recommend: 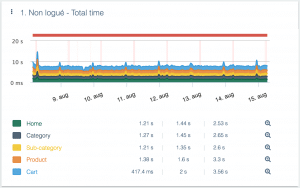 The total loading time for the classic sales funnel was, on average, 7,84s!

At QUANTA, our recommendation is that each page should load in under 300ms, which means that the entire sales funnel should load in no more than 1,5s. It’s a conservative goal compared to the “100 ms goal” decided by Google. These loading time goals are crucial when talking about SEO, User Experience, ..etc.

So you can see how the numbers of Footcenter were far from being satisfactory and that’s why they mandated us. But the main focus of QUANTA is not (and never should be) in the loading times by themselves, it should be: what is the impact of these loading times on the turnover of an e-commerce website?

Well, just see for yourself. Here’s a parallel between: 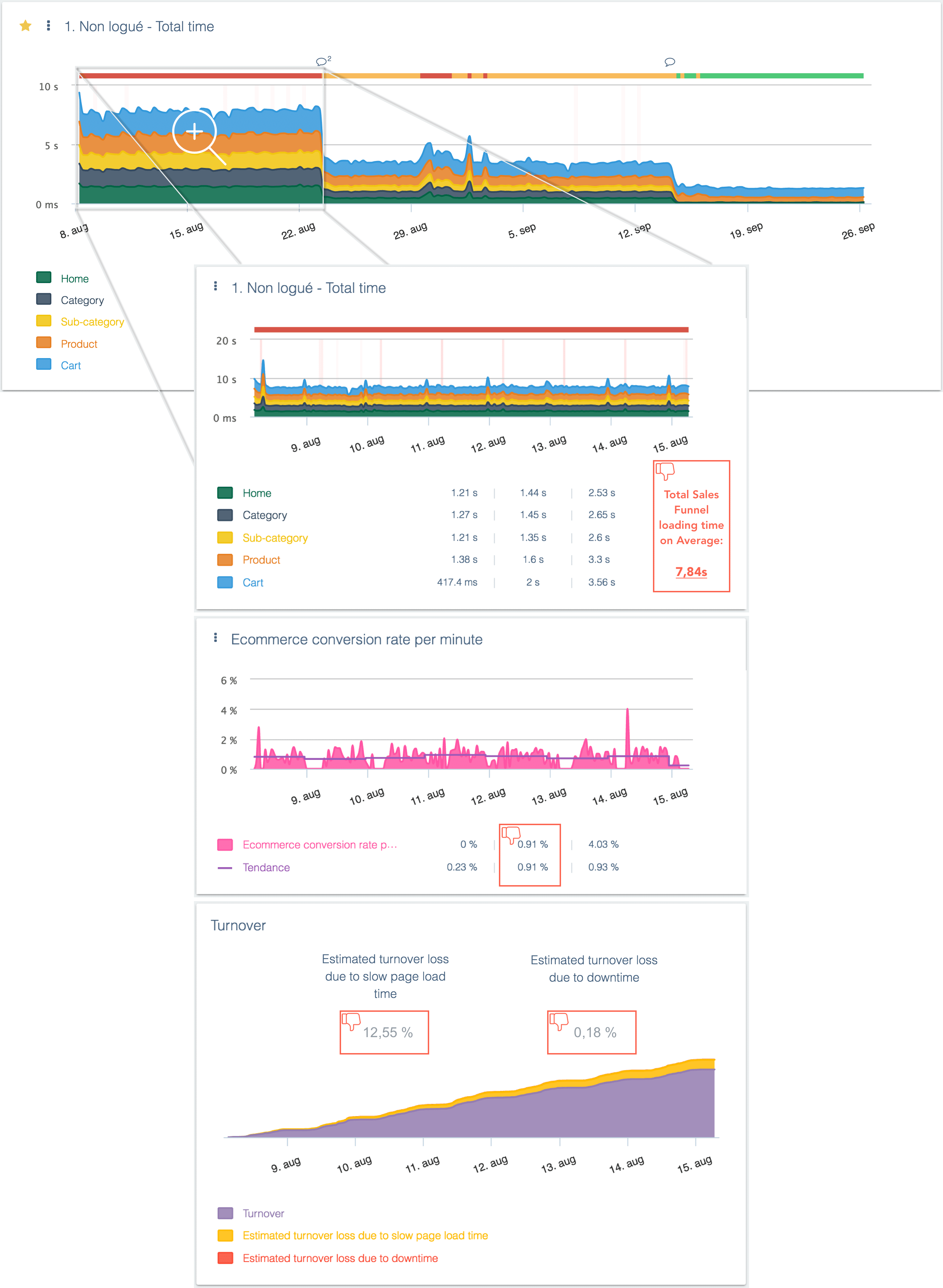 Footcenter before optimization – Screenshots of the “Page load time”, “Conversion rate” and “Turnover” widgets from QUANTA

Not so good, ha? A conversion rate per minute of 0.91% on average, and thus an estimated turnover loss of almost 13%. And all that because of a slow website, at each step of the sales funnel.

Of course, we didn’t pull these estimations out of a hat. 😉 These estimations were calculated by QUANTA’s “Conversion rate” and “Turnover” widgets, two of the many widgets available in the Business Dashboard feature of our monitoring tool, powered by none other than Google Analytics data.

But getting back to business. After we realized how important the margin of improvement was, both in loading times and turnover, it was time to get to work.

And that’s when working hand in hand with a conscientious web agency comes in handy. Not convinced? Well, just have a look at the results below!

As said before, our straightforward plan, in working with Footcenter, was:

And we did it ! Here are the graphs, after optimizations, that give you an idea of the power of web performance. 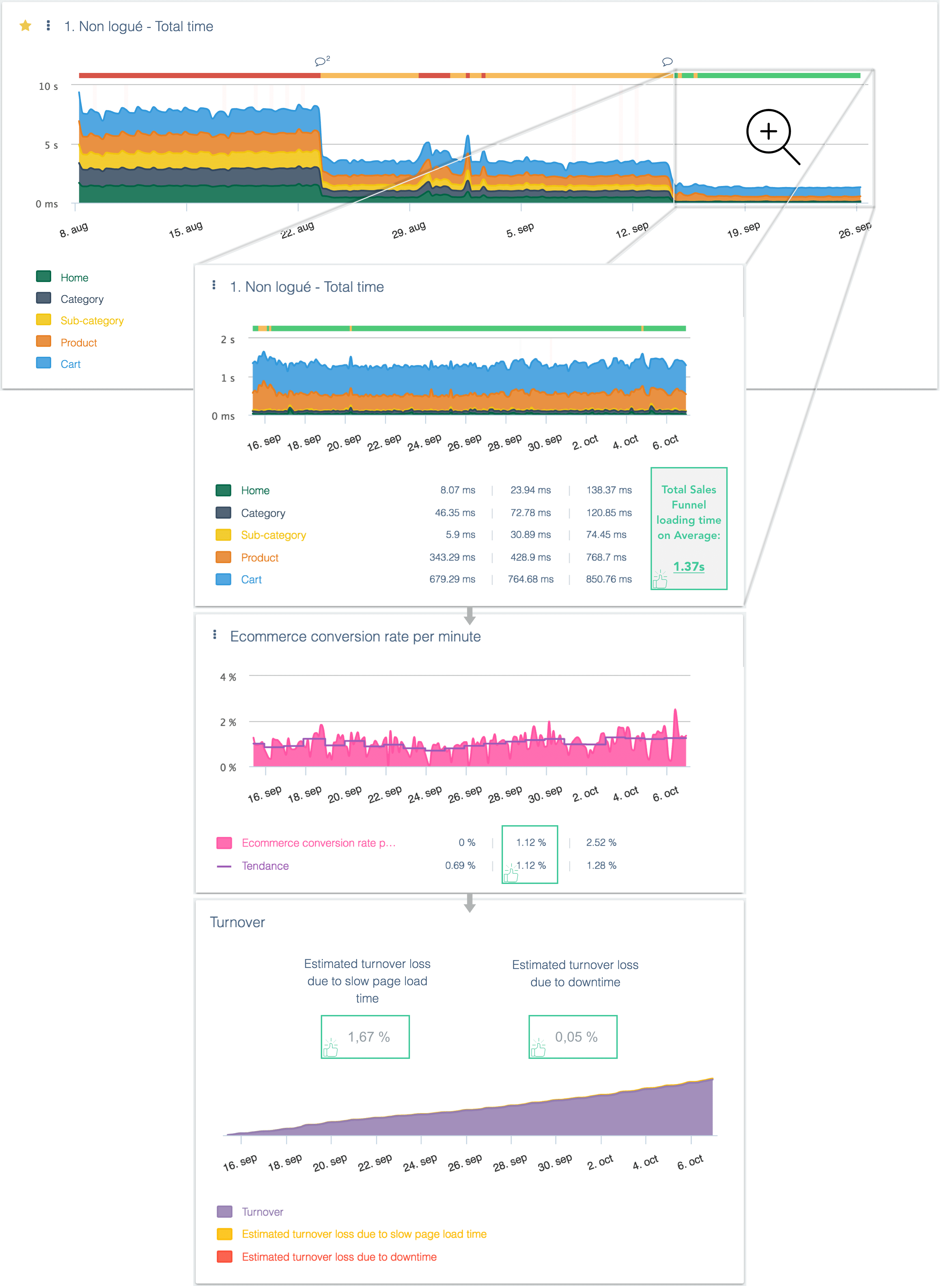 Footcenter after optimization – Screenshots of the “Page load time”, “Conversion rate” and “Turnover” widgets from QUANTA

And as you can also see in the graph, this surge in speed had a spectacular effect on conversion rates, and thus turnover.

And the turnover loss due to slow page load times went from 12.55% to just 1.67%, which indicates a reduction by 86% of the losses in turnover. That translates to a staggering 23% of additional turnover, far exceeding our expectations!

Optimizing a website can be touchy, and costly, if you don’t have the right tool and the right team for it. But, it’s really worth it.

In Footcenter case, the ROI due to the optimizations was about 500%, in just 4 weeks (and this includes QUANTA’s annual license price, and the time spent working on this case by QUANTA’s and web agency x2i’s teams). So, over a year, your investment is going to be 60x reimbursed.

Before bringing this case to a close, 2 piece of advice:

And for the final word. Be it in terms of accuracy in the predictions, monitoring, optimizations, or the features offered by QUANTA, this case study really shows that our tool can be a crucial asset in improving the web performance and the profitability of an e-commerce platform.